Cpl./Sgt. Romus Valton "R.V" Burgin was a mortarman non-commissioned officer serving in Company K, 3rd Battalion, 5th Marines during World War II. Throughout the miniseries, Burgin was in a leadership position within the mortar section of Company K and thus Sledge's superior.

When PFC R.V. Burgin arrived in Austin in late March 1939 the bustling city of about a million people was one of the most beautiful places he'd ever seen. Like most other new replacements, Burgin was only about three months out of boot camp in San Diego, and he still had plenty of work to do to become a full-fledged member of the Old Breed. But that didn't keep him from exploring the wonders of Melbourne to the fullest — and finding a steady girlfriend there.

"The people of Melbourne treated us like royalty," Burgin recalled. "They knew the American victory at Guadalcanal had eliminated the threat of a Japanese invasion, and they called the guys who fought there 'the Saviors of Australia.' Basically, the Aussies and Americans just liked each other, anyway."

In the course of his wanderings, Burgin met a girl named Florence Riseley at an ice cream parlor. He asked her out on a double date with Jimmy Burke and Florence's friend, Doris, and almost immediately, he sensed something special about her. After that, he spent less and less time with Jimmy in the pubs, where women usually weren't allowed, and more and more time on long walks with Florence.

The idyll lasted for about four months. Then, suddenly, it was ending. In the late spring of 1943 word came that the division would soon ship out, first to New Guinea, some 2,800 miles due north of Melbourne, then to someplace else. As yet, nobody knew where the "someplace else" was.

By this time, Burgin and Florence were unofficially engaged, and saying goodbye to her was the most difficult task he'd ever faced. Harder than leaving home. Harder than boot camp. Harder than anything.

Burgin is first seen in the series greeting Eugene Sledge, Bill Leyden, and Robert Oswalt along with fellow Marines, Snafu and De L'Eau. While Snafu teases the replacements and De L'Eau shows them around, Burgin just stays in the cabin.

At the time the marines landed in Peleliu, Burgin was the Mortar Squad Leader and not yet Sledge's Section Sergeant as the role belonged to GySgt. Haney at the time. So Burgin did not have a very large role during this time, and he usually just follows the rest of the squad through the beach and airfield. He relays orders from Lt. "Hillbilly" Jones to the Mortar Squad.

Burgin gets a slightly bigger role in the Bloody Nose Ridge. While the unit fights through the hills, Sledge asks Burgin why the Japanese won't surrender. Burgin merely replies, "Cause they're Japs." After much brutal fighting where the unit loses one of their own, Burgin brings some bad news: their Captain, Andrew Haldane, is dead, having been shot through the head by a sniper. Burgin leaves to allow stretcher bearers to carry Haldane through a column of sorrowful marines. Burgin is later seen with the rest of the unit in a boat, and then presumably in Pavuvu going to swim naked off the shore.

Burgin, Sledge, and Snafu later hear some more bad news from De L'Eau: he has been transferred to intelligence, so De L'Eau would not be joining the other marines in Okinawa

After Haney was relieved, Burgin gets promoted and becomes the Mortar Section Sergeant of Sledge's squad, under a new, and less likable Lieutenant in Okinawa. Burgin does what he can to keep Sledge and Snafu out of trouble, as well as two replacements, Pvt. Hamm, and Pvt. Tony Peck. Eventually, Hamm is killed and Peck is incarcerated. Burgin is then seen along with Sledge and Snafu in a truck leaving a section of the island. Some time later, Burgin, Sledge, and Snafu celebrate Victory in Japan Day outside of the crowd, and then contemplate their return home.

After some service in China, Burgin, Sledge, and Snafu finally return home. Burgin goes first, looking for Florence before realizing with Snafu's help that Florence couldn't get to the station this fast. Burgin then leaves the train.

Burgin eventually married Florence in January 1947, and they lived in Lancaster, Texas raising four daughters. Florence died on 25 August, 2011. Burgin died 6 April,2019 at the age of 96. R.V. and Florence are buried at Rawlins Cemetery in Lancaster. Burgin wrote a book called Islands of the Damned in 2010 with Bill Marvel, and he is also one of the Marines who gave interviews for the HBO series, The Pacific.

At the time, thousands of young men were volunteering each month for service in the Corps, and in many ways Burgin typified the kind of recruit the Marines were looking for.

He was strong and lean, toughened by eighteen years of life on a hardscrabble southeast Texas farm, where his family grew almost everything it ate, and Burgin and his six brothers and sisters helped wrest a living from the earth. He'd excelled in competitive sports in high school, learned to shoot rabbits and squirrels by the time he was ten years old, and was endowed with enough confidence to think he could hold his own with any man.

Burgin had always been tough-minded, physically strong, and thoroughly at home with any type of work. As a kid, he'd picked cotton for thirty cents per 100 pounds and gathered wild berries to sell in town for a dime a gallon to pay for his school clothes. As a 140-pound defensive end and blocking back on his high school football team, he'd earned enough respect from his teammates to be elected captain his senior year.

After being assigned to a mortar squad, Burgin had learned to set up his 60-millimeter gun faster than anybody else in the section — a feat that got him promoted to PFC the very next week. He was the kind of guy who followed his own instincts but was also a good team player. He had a low tolerance for bullshit, and he made no secret of it. He also exuded Texas bravado, and he didn't care who knew that, either.

The real Burgin after enlistment 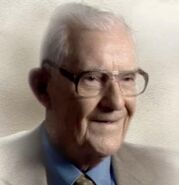 Burgin as he looks today

Community content is available under CC-BY-SA unless otherwise noted.
Advertisement